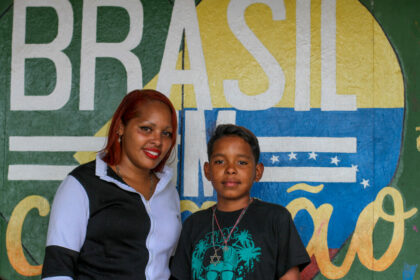 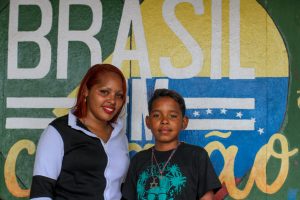 Hold your heart, hold your emotions, here comes an exciting story. The projects Fraternity on the Street, with its São Paulo branch, and “Brazil, a heart that welcomes”, in Roraima, both from the humanitarian organization Fraternity Without Borders (FWB), got together in August 2021 for a great mission that had just begun: to provide the reunion of a mother and her son, who were deprived of their coexistence by what we believe should not exist: a border, the border between Brazil and Venezuela.

Alícia Victoria Vargas Lopes, a Venezuelan who has been living in São Paulo -SP since 2019, went to Pacaraima, in Roraima, to pick up her son. She landed in Boa Vista on August 13th, where she spent almost a month staying at a friend’s house, on the outskirts of the capital of Roraima.

On September 4th, after many negotiation and collecting funds to send to the neighboring country, 14-year-old Ivan Alexander Jove Vargas, accompanied by a cousin, managed to reach Santa Helena, a Venezuelan border city.

On the same day, Victoria then went by intercity transport to Pacaraima, the Brazilian border with Santa Helena, to wait for her son to cross the border. And so, it was. Even though it rained a lot, and nothing went as planned, Ivan arrived safely in Brazil and was reunited with his mother in the middle of the street: “It rained a lot, and I was very afraid of having to go back. But everything went well. Now I am happy to be with my mother, I feel safe now,” said Ivan.

Mother and son spent more than three months in Pacaraima, where they were sheltered in the headquarters of a FWB partner church. They spent all this time trying to regularize their Brazilian documentation and to start an relocation process, without success with the relocation. Then, once again, with the help of donations, Victoria and Ivan were able to continue their trip. On December 15, they arrived in Boa Vista and were already on their way to São Paulo by plane.

“I found out that my son spent the first half of 2021 eating bread and coffee every day. This made me think that I needed to ask for help and face any situation to get him out of Venezuela. In São Paulo, Fraternity on the Street said they would help and so they did several campaigns to help us. I thank everyone for the fact that today I have my son by my side again,” said an emotional Victoria, standing next to Ivan.

Victoria, her husband, and the couple’s daughter Franlys came to Brazil in 2019, hoping to leave behind the economic and political crisis in Venezuela. They came to live with an uncle of hers who already lived in São Paulo. Ivan stayed in the neighboring country because the money was little and was only enough for Victoria’s expenses with her infant daughter.

“We, from the project ”Brazil, a heart that welcomes” were extremely happy with the contact from Fraternity on the Street, from São Paulo, and to be able to help this mother with her son in Roraima. We follow international guidelines for welcoming refugees and migrants, we treat everyone equally and we know that a flow must be followed, after all, many families are in the same situation. But we can help with orientation, shelter, food, and transportation, and that’s what we did. We are grateful to everyone who helped,” concluded Arthur Dias, coordinator of the Project in Roraima.

For those who have followed this story from the beginning, it may be cliché, but the feeling is one of a fulfilled duty. “Everyone was essential in this process and all we can say is that we are very grateful for all the learning and for this reunion,” said Francielle Benevides, a volunteer from Fraternity on the Street from São Paulo. 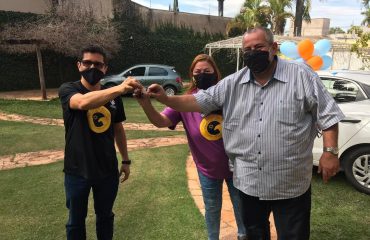 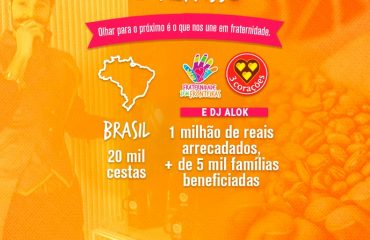